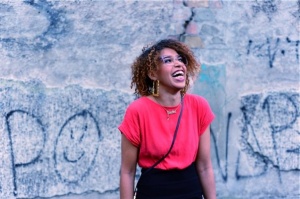 Spoken word is often monologue based, it is self-written solo performance, calling on skills in writing and performing your own text. Besides the self-written part, it owes a lot to dramatic theatre, but also older oral storytelling tradition and live poetry reading. It’s a kind of theatre of one in a way.

I was drawn to slam poetry in the late nineties as an audience member because I loved poetry, theatre and hip hop and saw slam poetry as an exciting contemporary fusion of all three. Later I went to film school and during our documentary module, I produced a short documentary on performance poet Paul Birtill. This introduced me to the London spoken word scene, and made me feel slightly more involved than an audience member, as myself and the crew virtually lived with Paul for the month we were shooting.

It wasn’t until ten years or so later that I performed myself. I had maybe done a few open mics before then, but was always far too nervous to take it seriously. Then on my 30th birthday a friend was hosting a cabaret in Farringdon and invited me to do something. I had never performed a full set before. I spent weeks preparing. By that point I was living in Berlin and experimenting, generally, so felt more open to the task. I also liked the idea of challenging myself on my 30th birthday. The gig went well, and after that I was hooked on performing. When I went back to Berlin, I became more focussed on spoken word than documentary filmmaking, and it took over. It helped that Berlin had such a massive poetry slam scene, and that people were happy to let me perform in English.

Spoken word seems to be quite political, or provide quite incisive social commentary. Why do you think this is?

I think there is a subset of spoken word (that some people like to call “issue based”) that can be particularly popular within British poetry slam. I don’t think spoken word is necessarily political at all. I think it can be, and when it is, it does often function as social commentary, kind of like the live version of a commentary column in the newspaper, and as video clips these often go viral, as they are more engaging than forwarding an article from the Guardian. This also leads to inspiring more work of the same.

But I think whether spoken word is political or not, or functions as social commentary or not, has more to do with the trends of spoken word in a particular scene. I think in England there is certainly a leaning towards the political, and this is also true in Spain for example. But in Germany there was much more of a leaning towards being funny rather than political, and in Scandinavian countries I hear it is more about being clever, and funny in a dark way. The French I think also can be political, but there is a hip-hop influence that can lead to more clever word play, and also some work that is more philosophical. I don’t know the American scene so well, but, of the two places I have been (New York and Chicago), I found New York much more rant-y and Chicago more thoughtful, and also often quirkier and funnier. I think one trend leads and becomes the norm, the tone and form that a scene writes to.

Do you think social media and social networking have been invaluable in the rise in popularity of spoken word? More than in other art forms?

The 2-4 minute poetry slam piece is a perfect match for YouTube. Performers often take up little physical space, look into the eye of the audience/camera, and perform into a microphone, and all this suits a static camera or even phone camera. It is very easy to film a poetry slam piece. There are also often enough people in the room for a performer to not even know they are being filmed. This all leads to a lot of documenting and sharing online, sometimes even when the poet is not aware of it.

I do think this has helped raise the profile of spoken word, but the way that it has I don’t necessarily think this is a good thing. A lot of what I see shared I think is lacking in writing and performance quality (but celebrated, because of the passion and energy). There are many times people send me a clip as an example of great spoken word that makes me cringe.

The other dangerous thing is many emerging performers are learning to perform and taking examples of performing by seeing how people perform in these clips. It creates a feedback loop where many people start to unknowingly adopt the same tone, delivery and cadence. Its easy to comment on cliché’s in writing, I think it takes a lot more focus, attention, and awareness of other forms of performance, to notice cliché’s in performance.

Do you think spoken word should be featuring more on the arts scene, such as at festivals? At Edinburgh there still aren’t that many spoken word artists on the programme. Or do you think this is still happening gradually and it will catch up?

I think that spoken word has a pretty decent profile within the festival circuit in the UK actually. The poetry stage at Latitude is as respected as music stages. Glastonbury, Boomtown, Larmer Tree and Secret Garden Party all have spoken word areas. I am sure there are many others I don’t know that I have not mentioned.

As for the Fringe, the PBH Free Fringe has steadily had its spoken word programme grow every year, to the point that the Banshee Labyrinth has become a spoken word hub. Across the Fringe in the paid venues and at Freestival and Free Festival, there are many shows featuring spoken word performers. More importantly, there is a growing audience each year for spoken word. I remember the first time I went to the fringe four or more years ago, the words “spoken word” on a flyer were potentially death to any chance of audience for your show, now people seek out spoken word shows at fringe.

Many spoken word artists seem to comment that it’s taken over their life in an unexpected way. As someone who works across lots of different media, how would you characterise your relationship to spoken word?

I respect spoken word as an art form that gave me the platform to find the courage to get on stage and communicate my stories to people, or more specifically crowds of strangers. I also respect the European poetry slam scene for training me in performing stories and connecting with audiences of different cultures (often not native English speakers) and in learning more about how humour works onstage, and also working with crafting narratives.

I have been part of the spoken word community for six years now, but over the last two to three I have been working much more in theatre, performance and documentary. However regardless of not working so much in the spoken word, I carry those skills of storytelling and direct engagement with audience on with me.

Do you have any favourite spoken word artists we should be keeping an eye on? Queer or otherwise.

This is a very hard question, as so many of my friends are spoken word artists and I don’t want to offend anyone by not mentioning them. But I will say the last two spoken word sets that really floored me were from Stacyann Chin and Salena Godden. The best theatre show I saw last year by a spoken word artist was Standby for Tape Backup by Ross Sutherland. Ross is a phenomenal artist. No one is doing anything like him. The show has a run in May at Shoreditch Town Hall. I can’t recommend it enough.

What do you think about events such as Queer’Say? Is there a need for them?

I love queer art events of all kinds. They are often the gigs I enjoy the most. I think hearing our stories represented, when they are not so often represented in the mainstream is important. It’s pleasurable and galvanising for the queer community. Also there are many people who are inspired then to perform their own stories, which I think is so important.

Do you think spoken word, as an art form, is more inclusive of minorities? Have you ever experienced any kind of prejudice?

This is such a hard question to respond to as it is so subjective to any particular scene. I think in London the scene is very inclusive of a variety of minorities. But I think programmers are really conscious about programming with diversity in mind. I also think because in England, and in London especially, identity politics is often a big theme in the work, it makes people more aware of diversity. But I still find myself on bills where I am the only woman or queer person, or person of colour, and sometimes that can’t be helped, sometimes that’s genuinely who’s available, just a reflection of greater society. I think also some kinds of minority get focus over others, so maybe for example people might think about balancing gender, or having diversity of race, but never think about queerness or disability.

In terms of prejudice, when I have been the only woman on the bill, and/or only person of colour. I get a little annoyed about how some people will moan about female artists writing “women’s material”. I have also heard a lot of straight middle class white performers complain about “issue-based work” i.e. issues that they don’t face.

I am also often in funny situations being a femme bi performer who is often read as straight. This means depending on which pieces I perform, I may or may not out myself, and it will affect what people (and promoters) say to me after. I once had a promoter complain to me that I hadn’t performed my “gay stuff” as he had seen me perform pieces about relationships with women elsewhere, and I guess he had booked me intending to show that diversity. I had just started seeing a guy and had broken up with another guy, so the work reflected those experiences. It felt weird that he made feel like I had falsely advertised myself or failed to deliver something.

How do you approach the performance element of your poetry, given that this is such an integral part of spoken word?

When I perform spoken word, it is usually from the perspective of telling a story to a good friend I havn’t seen in a long time. I always want the audience to feel like I am already close to them, and that is why I feel comfortable opening up. It’s monologue, but always with dialogue in mind.